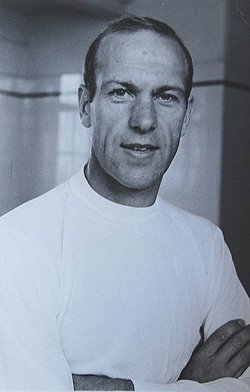 Thomas “Tom” White (born 12 August 1939 in Musselburgh) is a Scottish former professional footballer. He played as a forward. His older brother John played for the great Spurs double winning team of 1961 and Scotland.

A prolific scorer during his early career with Raith Rovers, White’s time at Rovers was shortened by two years of National Service, during which time he played for the British Army. He also played for St. Mirren, then managed by Jackie Cox. White joined Hearts for £8,000 in November 1963 and was soon dubbed “Goal-a-game White” by the local media.

His attacking partnership with Willie Wallace was particularly effective and earned the sobriquet the “W-formation”, White’s abrasive, bustling style complimenting Wallace. In tandem, they scored 48 goals during the 1963-64 season; however, White’s progress was interrupted when he suffered severe injuries in a car crash in Wallyford.

Further tragedy befell White in July 1964 when his 27-year-old brother, John, was killed by a lightning-strike at Crewes Hill GC Hendon. In November of that year, White transferred to Tottenham Hotspur for one game and played in a testimonial match for his sibling against the Scottish national side. 25,000 spectators paid their respects, as, despite White’s goal, Scotland won 6-2.

White remained a regular in the Hearts side up until January 1965; however, with Donald Ford blossoming into first-team contention, manager Tommy Walker saw fit and in June 1965 he moved to Aberdeen in an exchange deal for Don Kerrigan.

White spent a year with Aberdeen, proceeding to move to England, where he spent the remainder of his career. He went with teammate John McCormick to Crystal Palace in 1966, scoring thirteen league goals in 39 appearances. He then joined Blackpool in 1968, who paid Palace £20,000 for his services. He made his debut for the Seasiders on March 16, 1968, in a single-goal victory over Aston Villa at Bloomfield Road. He went on to take over the centre-forward role left vacant by Gerry Ingram’s departure to local rivals Preston North End.

In his first season at Blackpool, White teamed up with Tony Green, Tommy Hutchison and Alan Suddick. Injury curtailed his days at Blackpool where eventually he had an operation to repair his damaged ankles, and in 1970 he joined Bury. In two years with the Gigg Lane club, he scored thirteen league goals in just under a half-century of appearances.

He finished his playing career with a short spell at Crewe Alexandra in 1971-72. He later became a director of Blackpool for 12 years only to be ousted by the then new Chairman of BFC Owen Oyston, he also briefly served as the club’s caretaker-manager after the dismissal of Jimmy Mullen in 1990. He ended his association with Blackpool in 1992.